Lipogaine for Men – Can It Grow Beard Hair? 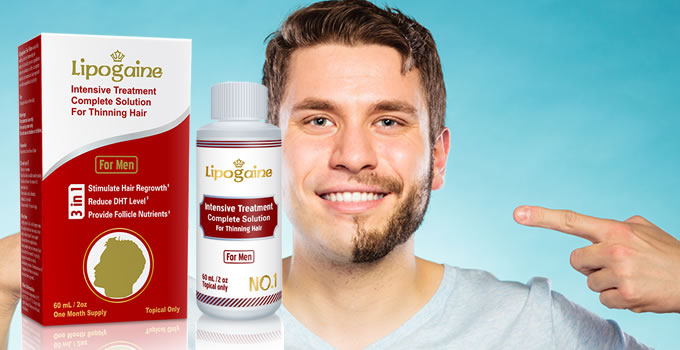 Millions of men who have experienced hair loss have had moderate to good success using Lipogaine for Men to regrow their hair, but what about beard hair? Can Lipogaine do the same thing for beard hair as it does for scalp hair? To find out, you need to understand a little bit about how Lipogaine for Men works.

How Does Lipogaine for Men Work?

Lipogaine for Men is a topical liquid that must be applied to the skin, directly on the spots where hair regrowth is desired. Lipogaine has one main active ingredient, Minoxidil. This is a drug that was first developed in the 1950s for research on its effectiveness at treating ulcers. As it turned out, the drug was completely ineffective at treating ulcers, but it widened blood vessels. It also had an unexpected side effect: in some users, it grew hair. It was believed that the widening of the vessels in turn allowed for more nutrients and oxygen to be delivered to hair follicles that had become shrunken and sluggish.

The manufacturer, Pfizer, saw potential for a whole new market in hair growth/regrowth and scrambled to get approval to test the drug for its effectiveness at growing hair. Minoxidil had the same effect on beard hair as it did on head hair in test subjects. Those who were able to grow head hair with Minoxidil were also successful at growing facial hair.

Within a few years, it began trials on men with hair loss. Finally, after years of testing, Minoxidil hit the market in the 1980s as a topical drug for growing/regrowing hair.

Minoxidil has been sold under a variety of brand names over the last few decades. It has also been added to other hair growth and maintenance products. Lipogaine is one of the most familiar and well-known. Lipogaine contains a five percent Minoxidil solution and is the main ingredient in Lipogaine’s formula responsible for growing hair.

While Minoxidil has been successful at growing hair for some men, others haven’t seen any growth at all using pure Minoxidil products. This is likely because, in those cases, hair loss is not caused by shrunken follicles and narrowed blood vessels. It is more likely that their hair follicles are being targeted by a substance called DHT.

DHT (dihydrotestosterone) is a substance that is produced naturally by the body when testosterone comes into contact with an enzyme known as 5-alpha-reductase. This process occurs naturally within the body. DHT is critical during certain periods of life, particularly when the male fetus is developing in the womb. DHT is what gives male fetuses their distinctive male characteristics. The female body also produces it, but to a much lesser extent than males.

The male body produces DHT throughout his entire life, but normally only in relatively small quantities. Problems arise when the body produces too much DHT during the adult years. DHT actually binds to hair follicles, preventing them from receiving nutrients supplied by the blood. Eventually, this leads to shrinkage of the follicle. It gets smaller and smaller until it finally dies altogether. The hair falls out, and new ones stop growing. For men whose hair loss is primarily caused by excess DHT, Minoxidil alone may not be effective, but, Lipogaine may be.

Lipogaine contains a 5 percent Minoxidil solution. However, it also contains some extra ingredients, added because they work in a different way. Azetinol, saw palmetto extract, beta-sitosterol, oleic acid, linolenic acid are herbal ingredients which naturally block DHT from attaching to hair follicles. Once DHT is no longer able to attack the follicles, Ligogaine’s other ingredients go to work reviving and re-awakening the follicles so that they can begin producing hair again. In addition to DHT-blockers and Minoxidil, Lipogaine also contains Biotinyl-tripeptide, Niacin and Apple polyphenol, herbal ingredients that help to stimulate new hair growth.

Will Lipogaine Work on Beard Hair?

Beard hair and head hair are the same, so if the product works for a particular individual, it will work in both locations. However, it is important to keep a few things in mind when considering using Lipogaine to grow your beard hair:

So is Lipogaine for beards? The answer is YES!

3 thoughts on “Lipogaine for Men – Can It Grow Beard Hair?”